As originally defined by Waldo Wedel (1959), the Great Bend Aspect contained two subdivisions, the Little River and Lower Walnut foci. More recent work has shown that the Little River focus needs to be subdivided. Sites near Marion County and those in McPherson County are two expressions of a single unit, while the remaining sites of the focus, on Cow Creek and the Little Arkansas, are somewhat variable and may require subdivision as well. Zehnder (1998) has proposed separating the McPherson sites from Little River and placing them in a Lindsborg phase. Two currently free-floating taxa – the Pratt complex and the Neosho focus – may eventually be assigned to the same unit as the various divisions of Great Bend. Sites in the vicinity of Augusta have not been analyzed sufficiently to allow placement.. 14BU313 Walnut Valley site is the Great Bend Aspect.

Age
A large suite of (as-yet unpublished) radiocarbon dates suggest that Great Bend begins about A.D. 1425 and lasts until the beginning of the 18th century. Most Great Bend populations left Kansas by A.D. 1720, and they emerge in Oklahoma and Texas as various bands of the Wichita confederation. In addition to radiocarbon dates, occasional finds of Southwestern ceramics and trade goods help to clarify chronological relationships. The age of 14BU313 remains to be determined, most of the evidence is Great Bend

Settlement Pattern
Great Bend Villages are located in Rice, McPherson, Marion, Butler and Cowley Counties in Kansas. There are three major clusters of sites: in Rice and McPherson counties, in Marion and in Cowley County. A smaller cluster lies on the Walnut River near Augusta. Each cluster consists of a scattering of large and small sites Finally, near Neodesha on the Verdegris River, there was once an earthwork and related sites that appear to be of late Great Bend Aspect affiliation. Hunting camps are scattered all across the eastern two thirds of the state.

The Walnut River is a tributary of the Arkansas River, 154 miles (248 km) long,[1] in the Flint Hills region of Kansas in the United States. Via the Arkansas, it is part of the Mississippi River watershed. According to the GNIS, the river has also been known in the past as the "Little Verdigris River".

The Walnut River rises in northern Butler County and flows generally southward through Butler and Cowley Counties, past the towns of El Dorado, Augusta, Winfield and Douglass. It joins the Arkansas River at Arkansas City. The Walnut's principal tributaries are the Whitewater River, which joins it at Augusta, and the Little Walnut River, which joins it in southern Butler County. The Walnut River drainage basin comprises 2,380 square miles (6,200 km2) in an ecoregion characterized by rocky, rolling hills and prairie. Elevations range from 1,050 to 1,625 feet (320 to 495 m) in the basin. Average precipitation, mostly summer rainfall, varies from 32 to 38 inches (810 to 970 mm) annually. Tallgrass prairie is the most common vegetation, covering 66 percent of the land. Crop land covers 23 percent and woodlands cover five percent. Major crops are wheat, soybeans, cotton, hay, sorgum, and corn. Cattle are the most important livestock.[2]

Near the mouth of the Walnut River, just east of Arkansas City, are a large number of archaeological sites. These are believed to be the remains of a Indian settlement visited in 1601 by New Mexico governor Juan de Onate. Onate called the Indians Rayados. They were almost certainly Wichita Indians. Based on Onate's description of the settlement, 10,000 or more Wichita lived along several miles of the Walnut River.[5][6][7]

looking Northeast toward Augusta water tower in the background and Highway 77 on the right.

Looking Northwest from the center of the field

South and a little west of the middle of the field. 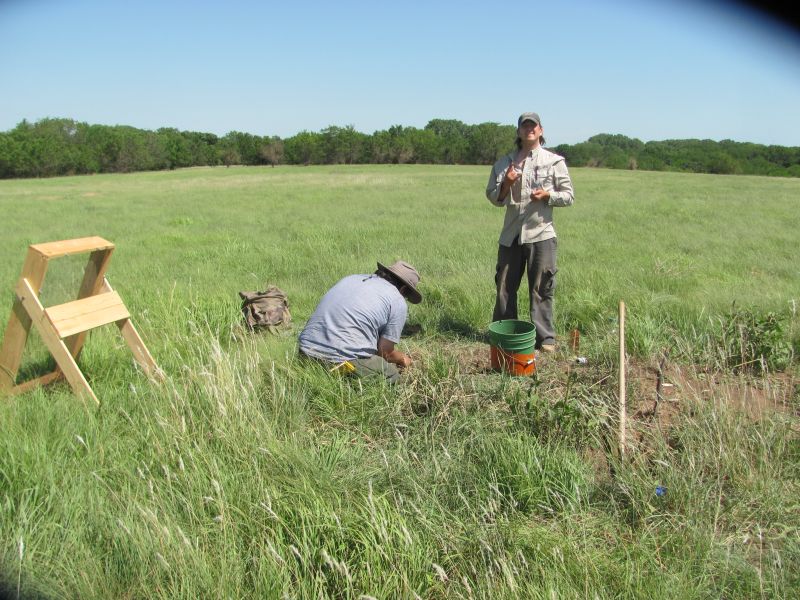 "El Primo" Chris is number one... not sure David agrees. 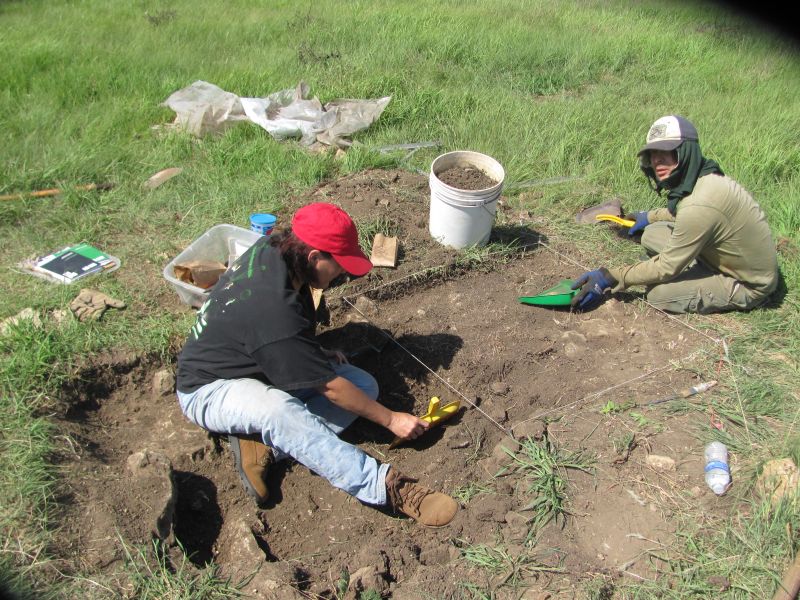 A Partial Pot found in this Midden

at hole.
Pot Handle to be added to the broken pot in the laboratory.

limestone floor just below and West of the midden that the pot was found in.

This one will get revisited as they did not get to the bottom of the bones in the midden and it was the location of the partial pot that was found.

Lots of flakes and some pottery in this midden. 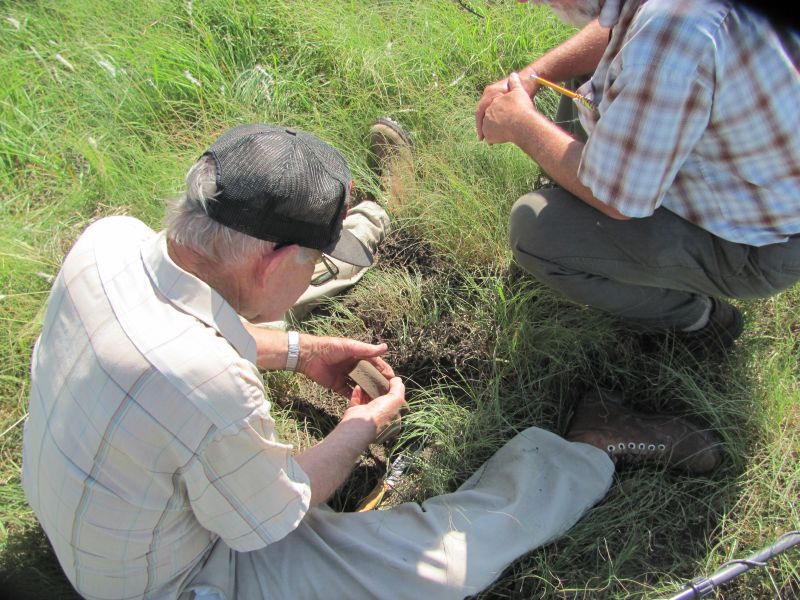 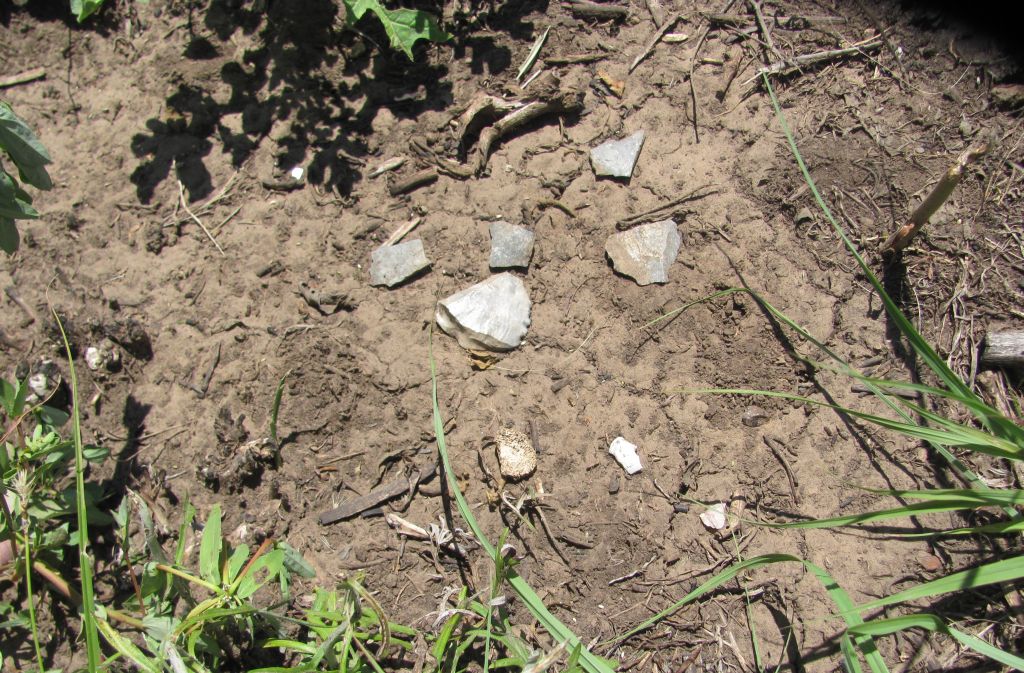 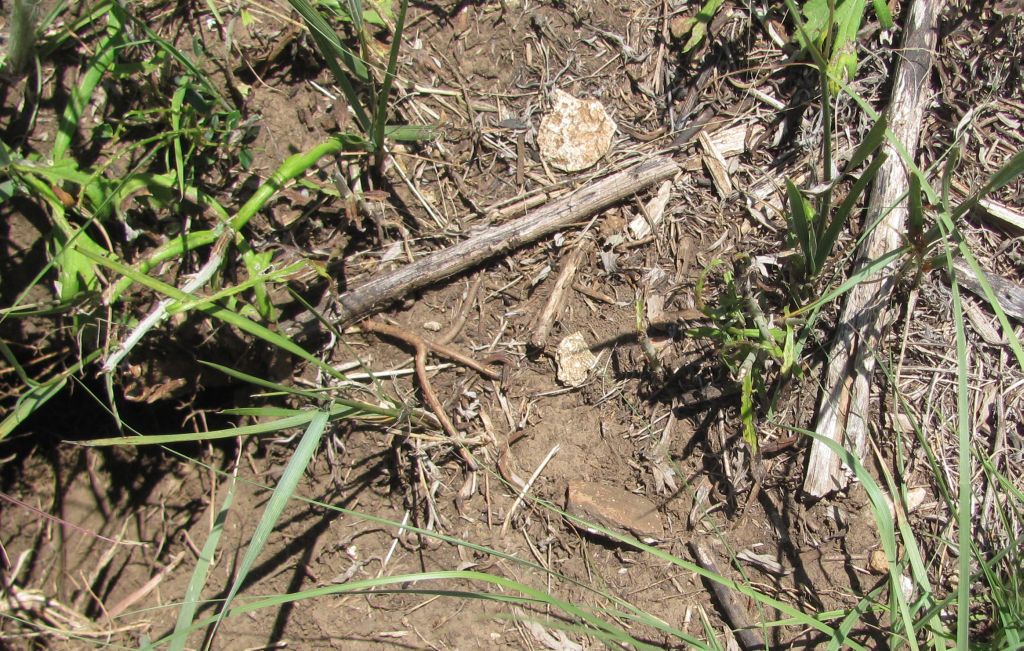 ____
surface find of flakes and one piece of pottery